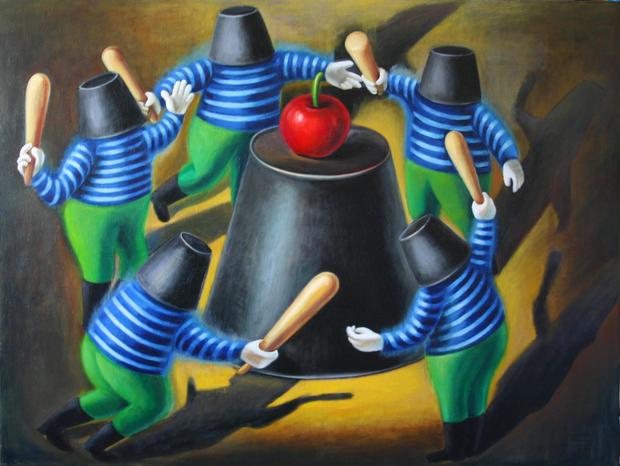 At 2pm and after class two seven-year-old girls go home to play.

I am one of those girls.

We need a table, two scarves, two buckets and … a wheel of cheese in the fridge.

We put scarves on our heads and start a long lasting fun of a game – the Siege of Leningrad.

We play in pair, but you can play with much more people.

As a matter of fact you can play with as many people as fit under one table.

You just need more buckets, more scarves and much more cheese in the fridge.

The game play is quite simple.

My friend and I are surviving through the horror of the cold winter 1941-1942, the very beginning of the Leningrad Blockade.

– My little daughter, we don’t have anything to eat,- This is me talking, – I go and try to find something.

I crawl out from under the table; rattling bucket in my hand.

I go straight to the fridge, cut a small piece of cheese from the 7 pounds wheel and go back.

We split the cheese in dozen little pieces the smaller the better.

This is our food supply for a week.

We eat it up in the matter of seconds.

Once food is finished – daughter goes out searching for scarce food; rattling bucket in her hand.

In the imaginary 40 degrees Celsius below zero she crawls to the – oh so distant fridge, opens it to cut off the next piece of cheese, our supply for yet another imaginary week.

The game goes on and on for hours until no cheese is left.

When my friend’s mother comes home she panics thinking we will suffer a cheese poisoning.

But we are fine.

Same as we are now – we are just fine.

So here is the question.

Why out of million possible games did we choose this one: the game of hunger, scarcity, hardship and suffering?

We had it all: great family, food on the table, great friends and fine health.

We had nothing to worry about.

Why the scary game?

Why running around my friend’s apartment with those rattling buckets pretending to suffer?

While thinking about it I had an epiphany.

Suddenly I saw the whole world in front of me running around with rattling buckets: little buckets, middle sized, huge ones.

There were even some people in the middle of the crowd pushing a whole tank car in front of them.

Such a waste of time.
Such a waste of life.
One simple question:
Am I alive?
I think I am…
Yes, I am, no doubt!
If I am alive,
What else is there to rattle about?

I fill my bucket to its edge with fertile mother-earth,
And plant a slender cherry tree directly to its heart.

Published by Queen Julia (The Perfect)

View all posts by Queen Julia (The Perfect)

calorie counter to lose weight Fashion faster way to fat loss Featured get fit go to gym Health and Fitness Fun how to get more energy how to have more energy i am a loser i have no energy Life change My Secret Online Fitness Game not losing weight Quit Smoking running for weight loss stress and weight loss Success Time travel walking for weight loss Weight loss willpower Writing
Follow on WordPress.com